Home»All Photographs»News»Teenager 'grew up' in Army 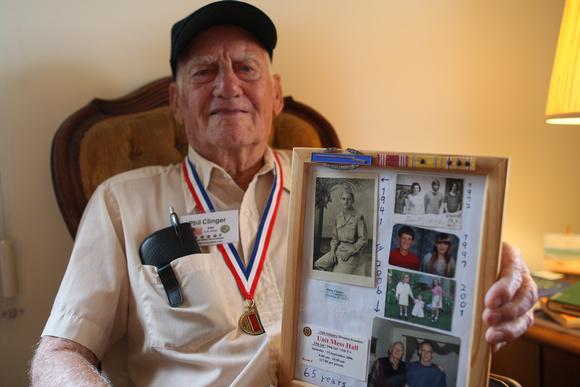 Dr. Phil Clinger an 88-years-old World War Two veteran sits for a portrait in his retirement cottage, Thursday, May 23, 2013 in Franklin, In. Dr. Clinger enlisted in the United States in August of 1941 at the age of 16 and served as an infantryman in the US Army in the Pacific theater until he was discharged in May 1945 after Victory in Europe Day, or V-E Day as it's more commonly known. During his service Dr. Clinger survived the Japanese Navy's bombing of Pearl Harbor and amphibious landings at Leyte, Dutch New Guinea, Hollanida and the Philippines. Dr. Clinger received the Combat Infantryman's Badge, for closing and engaging with the enemy as well as the good conduct medal and ribbons for the above mentioned operations. After the war Dr. Clinger attended veterinary school on the GI Bill. He practiced medicine as veterinarian in Rochester, In. for 20 years and worked as a state inspector for 20 years after that. In 2003 Dr. Clinger moved to Franklin, In. where he and his wife retired in a cottage at the Franklin United Methodist Community. Mike Wolanin / Daily Journal