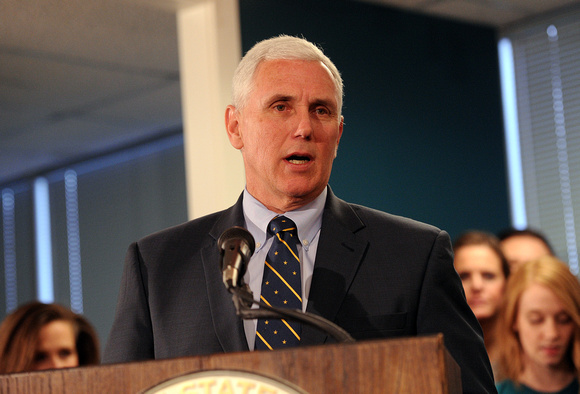 Gov. Mike Pence speaks before signing two bills into law during a visit to One Click Ventures in Greenwood on Tuesday to highlight that local business, sign two pieces of legislation into law, and lead a quarterly meeting of the Indiana Economic Development Corporation.

One Click Ventures is an e-commerce marketing business that owns several brands that sell sunglasses, scarves and purses, among other items. The business, located near Emerson Avenue and Main Street, was chosen to highlight a technology-based business that has experienced growth, Pence said.

Pence signed Senate Bill 1, which lowers the corporate tax rate to 4.5 percent. The law will allow towns, cities, and counties the option to remove a tax on equipment used by businesses. The tax brings $10 million into Johnson County on a yearly basis.

Greenwood Mayor Mark Myers attended the bill signing, but has previously said he would not be in favor of eliminating the personal property tax. Pence will not push any officials to implement the tax cuts, and likes the new law because it gives each county the option to do as they see fit, he said.