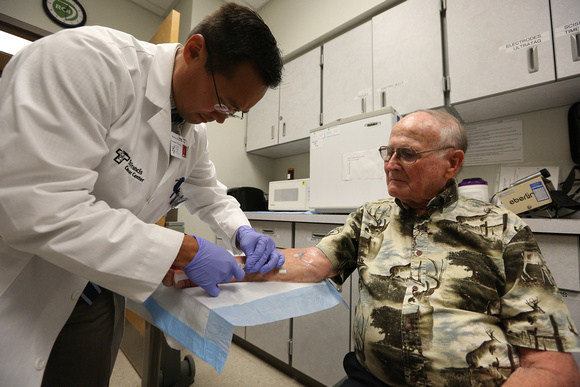 Radiation Oncologist Dr. Michael Eaton administers the cancer treatment drug Xofigo to Robert Wright at St. Francis Hospital in Indianapolis. Robert, a retired teacher and WWII veteran, was diagnosed with prostate cancer seven years ago. After being diagnosed he underwent hormone therapy until the treatment failed earlier this year. Wright was selected to receive Xofigo because it works best on his type of cancer and it became available for use in cancer treatment around the time he stopped hormone therapy. Robert was the first cancer patient in Indiana to receive Xofigo. Mike Wolanin / Daily Journal